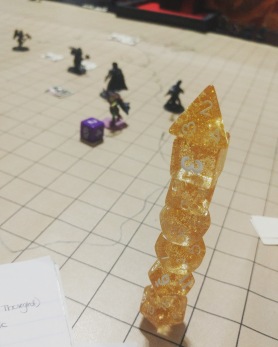 That’s right, I’m getting down with my bad nerdy self, today! Since the debut of the Netflix show, Stranger Things, there has actually been a resurgence of interest in this once-nerdified strategy game. I began my first ever experience & campaign with D&D about 2 years ago. My husband had gotten into it by joining a game with some friends. After a few sessions, he invited me along & I’ll be honest, I was somewhat hesitant. I had this image in my head of people dressed up in medieval garb or like elves. Now, I’m not knockin’ people that participate in stuff like that, I just knew I wasn’t quite ready for that level of nerdage, but, alas, I decided to go. In that first session, one of the other players had to leave early so I ended up taking over her character- I panicked at first because I had no clue what I was doing & I was afraid to mess up. Ultimately, I ended up joining the campaign with my own character that David helped me create…& just in case you’re wondering…no, we don’t dress up.

I’ll be honest, it has been an interesting “adventure” & experience. Aside from trying to learn the rules, how to decipher a character sheet, & remember which die to roll for which thing, it has been a really great experience that has helped me make good friends, changed how I understand & think about things like strategy, & taught me a lot about myself & life.

When I started, I already knew the people in the campaign, but I wouldn’t say we were the closest of friends or acquaintances. Over time, though, this game created an atmosphere of camaraderie & teamwork. It has given me the opportunity to make some really great friends. It opens the door to a creative side of people, it breaks down walls that are typically automatically up, & it makes you work together to solve problems & strategize which helps you learn a lot about the people involved & has given me the opportunity to make friendships I will treasure forever.

This game has changed the way I think about things. Don’t worry, I’m not worshipping any funky, weird, make-believe, elven gods or anything, but it has helped me have a better understanding of strategy in the game & in real life. For an example, a few months ago I was reading a passage in Numbers (Numbers 1:47-2:34) that described the camp formation God had instructed the Israelites to use as they traveled toward the promised land. Before playing this game, I probably wouldn’t have thought about it at all…oh, okay, they’re traveling in a “+” shape going east…whoop-di-do. But since learning strategy from D&D, I started thinking about WHY God had them travel like that. They were set up so the largest camps were on the Eastern side (the direction they were traveling), a smaller number was in the back (Western side), & there was a “middle” number on each of the Northern & Southern sides, with the Levites & tabernacle in the center. I realized, woah…God set them up strategically! They would be more likely to be attacked from the front, from the direction they were traveling, so more people should be up front. Then there were the “middle” numbers to the North & South- if the camp WAS to be attacked from the West (behind), some fighters from the North & South could be shifted to the back to help & still have the sides protected. And of course, they traveled with what was most valuable to them nicely guarded in the center. It just blew my mind that God had even planned for that…& I could’ve missed it without the strategical experience from D&D.

Also, D&D has taught me the importance of planning ahead. When I first started, I was often distracted by having to grade papers while playing so I would wait until it was my turn to figure out what I wanted to do. Sometimes, I would’ve missed what had already happened or what was really needed to be successful. In playing, I learned I needed to make sure I was paying attention to what was happening before it got to be my turn so my actions could be most useful & beneficial for everyone when it came to my turn. This is important for life, too. If we’re just floating through, not really paying attention to what is happening around us, we may miss something really important. If we fail to plan ahead or prepare for what is coming, we could miss out or make huge & stupid mistakes. If we really want to make an impact in this world, we have to be intentional about the things we do.

As you’ve read before, I often struggle with making decisions, especially those I feel like are really important or will have a big impact. I struggle because I fear all the “what ifs” that could happen. I did this in the game, too. I would struggle with what actions to take, what “spells” to cast, or who to “heal” because I was afraid of “the what if I miss?” “what if I make a mistake?” Recently, though, this game has reminded me that sometimes if you have a big decision or choice to make but you hesitate or avoid it because you’re afraid of what might or might not happen afterward, you’re making the decision by doing nothing. Trying and failing is better than doing nothing at all because when you try & fail, you often learn a lot & grow in the process. And if you try…you might surprise yourself & succeed.

“Making no decision is a decision to do nothing, and doing nothing always brings you to nowhere.” – Robin Sharma

And finally, playing D&D has taught & reminded me that life is not all about me. You see, in the game, I am a cleric…I am the main “healer” in the group. There’ve been times when we’re fighting big monsters that I see the others in the group attacking & causing huge damages to the bad guy. I see that and am like, “man, I want to do that, I want to be the one to take it down”. I get jealous of the attacks the others can do & forget that I still have a huge part to play. If I use up my limited attacks on the bad guy but don’t defeat it, then I lose the opportunity to help save & heal the rest of the group, & it could cost someone their character. It’s been a good reminder that we each have our own unique talents & God has given each of us our own particular purpose in this life & on this planet. It’s important that we don’t get distracted by what others are doing, but focus on what God’s purpose for OUR lives are & then DO it…because if we don’t, we may miss the chance to have a huge impact in our own way on those around us.

Who knew a nerdtastic strategy game like D&D could teach so much more than ability checks & spellcasting modifiers? Can someone roll for perception?? 😉